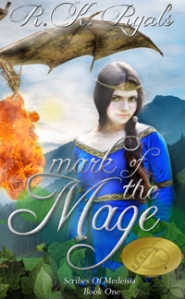 Mark of the Mage is an Indie B.R.A.G. Medallion honoree

Books never die, but they can be forbidden. Medeisia is a country in turmoil ruled by a blood thirsty king who has outlawed the use of magic and anything pertaining to knowledge. Magery and scribery are forbidden. All who practice are marked with a tattoo branded onto their wrists, their futures precarious. Sixteen year-old Drastona Consta-Mayria lives secluded, spending her spare time in the Archives of her father’s manor surrounded by scribes. She wants nothing more than to become one of them, but when the scribes are royally disbanded, she is thrust into a harsh world where the marked must survive or die. 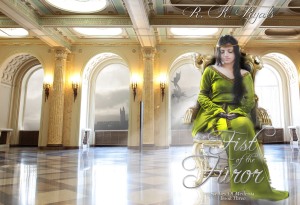 The Scribes of Medeisia Book 3

Fist of the Furor

There is chaos in the kingdom of Medeisia. The rebels have gone into the mountains to hide, protected by the dragons. Their only hope lies in a band of insurgents who made an arduous trek across the Ardus to seek the aid of a king … Plagued by grief, seventeen year-old Drastona Consta-Mayria becomes a leader for her people, the voice of the common folk, the forest, and the dragons. Living now among the royalty of Sadeemia, Drastona and the rebels must navigate something much more complicated than war, politics. Prince Cadeyrn of Sadeemia is a powerful mage, a second son living under the constant threat of assassination. He’s a man existing in the shadow of tragedy. But there is hope in his magic, hope in the way he fights, and hope in what he can do for his country. War has been declared between Sadeemia and Medeisia, a war led by rebels and aided by a king. But can the rebels survive the court of Sadeemia? For in the magnificent marble halls lies betrayal.

“People die so others may live.”

Fist of the Furor: The Scribes of Medeisia Book 3

The Hall of Light was magnificent during the day, reflecting sunlight through white marble, turning it golden and full of possibility. But at night, it was even more brilliant, a testament to power, to the infinite possibilities of the universe. At night, it was white marble turned grey by shadows, the huge glass window in the ceiling a picture of bright stars that told the stories of the gods, the god of unrest and the goddess of serenity. At night, the Hall of Light was filled with a reverent silence, the kind that called ghosts but also helped put them to rest. Prince Cadeyrn of Sadeemia stood in the middle of this hall, his hands clasped behind his back, his legs spread. He was naked from the waist up, the tattoo on his person a complex map of black on pale, moon-bathed skin. He was a sentinel of the gods, a man of prophecy, a man of steel. But it wasn’t glory he sought as he gazed up at the stars above his head, it was peace. “You seek too much in the gods,” a voice said. Cadeyrn stayed as he was, erect and solemn. He’d grown up with Mothelamew’s breath in his ears, his words burned into his brain. The head mage was an eccentric man, full of secrets no one should ever know. As a boy, Cadeyrn was unnerved by the mage. Now, he tolerated Mothelamew’s presence, respecting him but never trusting him. Cadeyrn trusted no one. “You never sought them out enough,” Cadeyrn replied. Mothelamew chuckled. “I seek them when necessary. The gods are there to guide us, but in the end, we make our own choices, good or bad.” Cadeyrn stared hard at the night sky, his eyes narrowed. Mothelamew watched the prince knowingly. “You blame them,” he stated. It was there in the set of Cadeyrn’s jaw, in the way his eyes searched the constellations, his gaze directed at the formation known simply as “the lovers” by the Sadeemians. What he felt for the gods, hatred or shame, was hard to tell with Cadeyrn. “I blame myself,” Cadeyrn corrected. Mothelamew stepped around the prince, his flailing blue cloak grey in the darkness. He pushed back his hood, revealing his lined face and long, trailing white beard. “You blame them. You blame them for many things.” Cadeyrn unclasped his hands, his biceps flexing as he brought them forward, his fingers fisted. “You speak of things you do not know, mage.” Mothelamew looked at his old pupil, at the prince’s blue eyes turned black in the shadows, at the power Cadeyrn kept leashed just beneath his skin. “In the end,” the mage said, “the gods cannot control death.” Cadeyrn turned. He would have left if Mothelamew’s hand hadn’t stopped him. The contrast between the mage’s long, wrinkled fingers and the prince’s strong, smooth shoulder was even more startling in moonlight. Old on new. Wizened versus jaded. “You are like our god in many ways, prince,” Mothelamew said. Cadeyrn shook his hand loose. “Do not compare me to the gods.” The prince stalked off then, but not before Mothelamew’s words echoed down the Hall of Light, following him. “You,” Mothelamew called out, “are Sadeemia’s own personal god of unrest.”

71 thoughts on “The Scribes of Medeisia series”