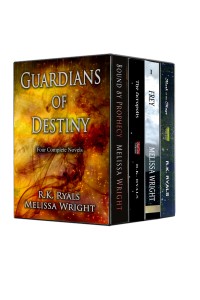 Amazon bestselling authors Melissa Wright and R.K. Ryals has teamed up to release a box set of four of their full length fantasy firsts.

Bound by Prophecy by Melissa Wright

Twenty-two-year-old Aern is done watching his brother destroy the only thing that matters. He never wanted to take Morgan’s place among council, never wanted to rule their hidden world. But when the key to the prophecy is found, a young girl named Brianna whom Morgan will destroy, Aern knows he has to take action. What he really wants is for things to go back to normal. But now he’s kidnapped a girl, and his brother’s men are after him. His only hope is to join with the Division, but they have
plans of their own, and it’s the last thing Aern is willing to do.

Emily just wants her sister back. She doesn’t care about the prophecy, or know what’s
at stake. But when she goes after Aern, the truth of the matter uncoils, and
Brianna isn’t the only one who’s in danger.

Suddenly, they’re at the center of a secret war, and unless they can work together, they’ll both have a sacrifice too big to make.

The Acropolis by R.K. Ryals

“We have a new assignment for you, Mr. Reinhardt.”

These words are not comforting to me. At eighteen, I am a gargoyle who has been demoted because I broke the rules. Now I have a new mission, a new mark to protect. But I don’t expect Emma Chase. I don’t expect to question my own race. I don’t expect to care for my own mark. And I am not prepared for what I find at The Acropolis.

Unaware she’s been bound from using magic, Frey leads a small, miserable life in the village where she’s sent after the death of her mother. But a tiny spark starts a fury of changes and she finds herself running from everything she’s ever known. Hunted by council for practicing dark magic, she is certain she’s been wrongfully accused. She flees, and is forced to rely on strangers for protection. But the farther she strays from home, the more her magic and forgotten memories return and she begins to suspect all is not as it seems.

Mark of the Mage by R.K. Ryals

Books never die, but they can be forbidden.

Medeisia is a country in turmoil ruled by a blood thirsty king who has outlawed the use of magic and anything pertaining to knowledge. Magery and scribery are forbidden. All who practice are marked with a tattoo branded onto their wrists, their futures precarious.

Sixteen year-old Drastona Consta-Mayria lives secluded, spending her spare time in the Archives of her father’s manor surrounded by scribes. She wants nothing more
than to become one of them, but when the scribes are royally disbanded, she is
thrust into a harsh world where the marked must survive or die.